from Fuzz of the Month by the Warm Fuzzies 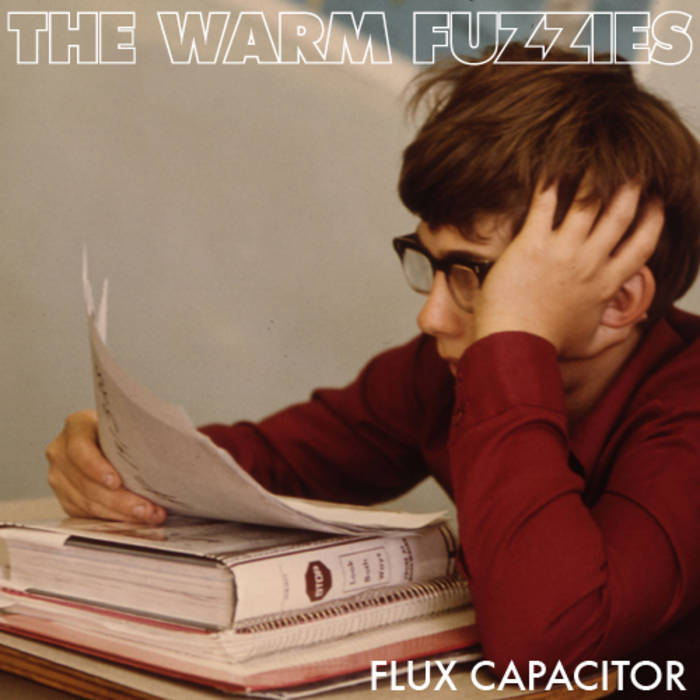 To be quite honest, no one can quite remember how Flux Capacitor was recorded. Davey seems to remember writing the songs during what he called "those stupid cold months," though Jason seems to remember having some sort of hay fever at the time, a condition he usually encounters later in the Spring. For his part, Jonathan thinks all of our songs sound the same, so he doesn't bother to remember such things or learn the titles of our songs, and Laura, as usual, remembers everything - but in a foreign language. I don't have to tell you how difficult that makes things.

At some point, however, we are certain that Davey wrote the changes and Jason helped with the words, and then at some point after that, we played it several hundred times at our dingy (and yet, homey) practice space we share with seemingly every other heavy, death-and-doom-ish band in Athens. We find the contrast a nice juxtaposition. Later, the song became a staple of our live set, and by that, I really mean that very often it seemed that "Flux" was the only song half the crowd really liked. It usually came pretty early in the set (you know, you gotta hit 'em hard up front), which meant that we did a good job of raising expectations, then following them up with crushing disappointment. Say what you want; we're all about emotions, man, and those are two of them.

At those first shows, you could usually find a member of Mattox's family in attendance, a feat doubly impressive for the fact that it raised the median age of the crowd by about two and a half decades. Old people love our music. Old people also don't hear very well, so we don't let it go to our heads. One particular night, after we finished melting the faces of the eighteen or nineteen people crammed into a huddle in the middle of the Caledonia (due to the broken heater) into gelatinous masses, Mattox's great-great grandfather pushed his Jazzy over to the merch table and told us that "Flux" had real hit potential. At least that what's we think he said; his dentures were kind of loose.

But it got us thinking that he might be right. We just thought that if we could get people to listen to this song, then they, too, would realize how awesome it was, and somehow things would work out. So, taking a page out of the Jehovah's Witness handbook (a good read, if you can get hold of a copy), we took our songs to the people and knocked on doors with our Discmans (Discmen?) in hands, ready to kick-start the revolution.

You know, maybe the world wasn't quite ready for the revolution. And we were not quite ready for all the threats and restraining orders we received. America is still armed, people. I can assure you of that.

A band that calls itself "the Warm Fuzzies" can't be down about such things, however (it's in our bylaws), so we decided that what we really needed was a good recording of the song. Something we could be proud of. A hit in our own households, if you will. By this time, Mattox had quit the band to actually do things with his life, which brought the median age of attendance back down and took away most of our fans. I don't think we realized at the time how big Mattox's family was. So armed with the old tracks that the awesomely mustachioed Eric Friar recorded at D.A.R.C. for the 2009 Athfest compilation, we set about updating the song a bit over at Paul Reeves' Domus studio. Then things got international when our Australian mate Mark Tulk of SmallHouse Creative put the mix-magic on the sounds at his RoomFiftyThree studio on the Eastside of Athens. Everyone knows that the Eastside is the new Five Points, right?

And now we're giving it to you.This song has been around as long as our band; thanks for checking it out. We hope it's been worth the wait.

You sat right next to me in visual art
I had some red construction paper folded into a heart
But then Stewart, my nemesis classmate
Asked you if you would be his prom date

Chorus:
If I could have one more shot
I know I could steal your heart
I'd be the one you'd write your poems about
Each day it becomes more clear
Since then it's been all down hill, so
I'd really like to go back to that...
And everything after.

I danced alone, and I was blowing it up
With the moves I took from Donald in "Can't Buy Me Love"
Everyone spread out in a circle
I was the disco inferno
In the middle of the "anteater dance,"
I could feel you looking at me
And you gave me the chance
All I had to do was to tell you...
Instead I did the routine from "Thriller."

Chorus:
If I could have one more shot
I know I could steal your heart
I'd be the one you'd write your notes about
Each day it becomes more clear
Since then it's been all down hill, so
I'd really like to go back to that...
And everything after.

Looking back I see that I gave your heart away

Chorus:
If I could have one more shot
I know I could steal your heart
I'd be the one you'd write your songs about
Each day it becomes more clear
Since then it's been all down hill, so
I'd really like to go back to that...
And everything after.